I hadn’t planned on visiting Port Arthur on our trip as I’m not terribly familiar or interested in Australian history. I did however, want to see The Isle of the Dead in Port Arthur. Can’t see one without the other so we went for a day and I’m so glad we did.

I could go on about the history of Port Arthur in this blog; but, really you could research that in your spare time. There were a few things that did really fascinate me while we were here and so I will make mention.

The way the tourists are managed throughout Port Arthur is very well done. I have a degree in Tourism and Hospitality Management which really doesn’t get much of a workout. What I do like to check out while at tourist attractions is how the attraction manages the tourists and I thought Port Arthur did this very well. As part of the bronze ticket, the cheapest ticket you can buy, you get an ipod with a self guided tour so you can walk around on your own and have all the information at your finger tips. You are also entitled to participate in an introductory tour which goes every hour and a guide will walk you around and provide you with the information found on the ipod and other relevant stories.

I also found the tour guides and staff in general to be fantastic. They are obviously passionate and very knowledgable about Port Arthur and liked to share stories about the convicts, the jailers and their families to really make the experience come alive for us visitors.

As the main motivation for visiting Port Arthur was The Isle of the Dead tour we booked and went on it first. The Isle of the Dead is a small island off the Tasman peninsula. It was used as the graveyard for Port Arthur from 1833 to 1877. Around 1100 dead are buried here. Basically anyone who died was buried here so not only the convicts but  officials, soldiers and their families. On the lower side of the island the convicts were buried, mostly without headstones in mass graves. It was forbidden to place headstones on a convicts graves; however, there are a couple of exceptions to the rule. The soldiers, officials and their families were  buried on the higher north-western corner of the Island, class rules were strictly enforced in life and death for these people.

The tour guide was engaging and obviously loved her job, she told us stories of some of the dead, the grave keepers, families and interesting burial facts.

The other place I wanted to make mention of in this blog is the Coal Mines Historic Site. Port Arthur is on one side of the Tasman Peninsula and the Coal Mine is a drive to the other. It’s free to see, you just drive up and park. We didn’t know anything about the Coal Mine; but, a guy at the caravan park said that we had to go and see it so we did. We were the only people there at the time so had the whole place to ourselves and it was spectacular.

We had a detailed information brochure and map of the area so we self toured around. It was worth the short drive out to see it. 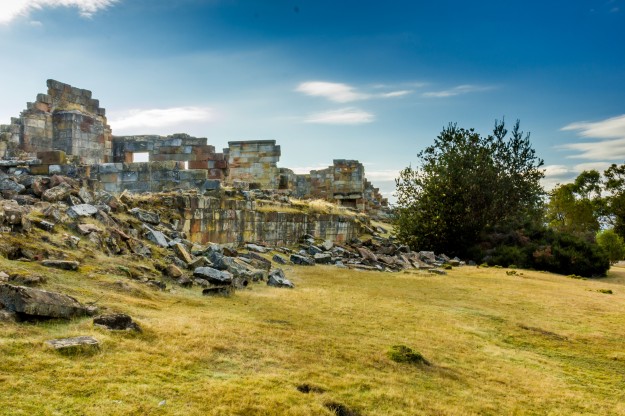